A Golden Retriever had been lying unresponsive for hours when Hope For Paws received a call on their emergency line. Eldad Hagar and Loreta Frankonyte knew they had to respond quickly and when they arrived they found the dog crouched behind some bushes in the corner of a building. 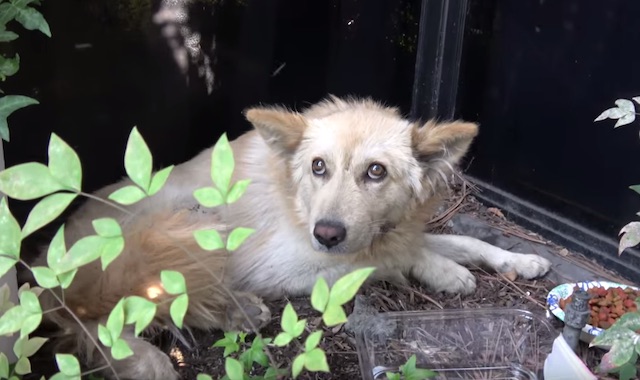 “Antonio” looked at them with a confused and scared expression as they approached him. He didn’t have any visible trauma, but his reluctance to move and refusal to eat anything told his rescuers that something was seriously wrong with him.

They rushed him to the hospital where the veterinarian, Dr. Pedraza, examined Antonio. The vet suspected someone had violently kicked the dog and caused life-threatening injuries.

“He told us that looking at the ultrasound images, it looks like he was kicked really hard,” Hagar wrote on YouTube. “He didn’t believe that the dog was hit by a car because there were no signs of that – no road rash, no broken bones, no visible trauma that is always present in cases where dogs are hit by cars… it was a hit that injured his liver and spleen.”

“Because of the injury, Antonio was bleeding internally, and the doctor told us that if we didn’t get to him that day, he would have bled internally and would have died within hours,” Hagar continued.

As Antonio’s spleen was ruptured it had to be removed, but after surgery, he was able to go home with The Little Red Dog animal rescue. And it wasn’t long after that he got to go to a permanent home!

Seeing Antonio in the care of his new family filled our hearts with joy. And it appears he is filling his family’s home with joy too as you’ll see in the video below.